The tap is not really clean there is still a lot of scale on it. I can't get a toothbrush or bottle brush in the gap. Unfortunately the net from Lakeland is out of stock Col but I will keep a look out for one.

I like vegetables and have a small repertoire of vegetarian dishes but I'd never eat the fake meat dishes, fake bacon or fake sausage. I think it's too akin to the crap Steve eats.

Minus 5 this morning, I put the heating on and got back into bed until the boat warmed up.  Parts of the marina were frozen today the ice wasn't thick but it was enough to confuse the swans.

Beano and I managed 9.37 km today. We started off in one direction but the sheep all came running to the fence hoping for food so Beano changed direction and we walked beside an empty field instead.

I struggled to stay warm during the day because Beano needs to go out, so no sooner am I warm that I'm back out in the cold again.

Is anyone trying Veganuary?

I'm not, it sounds to me like I'm being asked to eat a vagina!

Yesterday was very cold, the heating was on twice for an hour each time. Steve came on one of the walks with Beano and managed 5k.

We had liver and bacon for tea, it was made last week and frozen.

Today we had a food shop delivered, there were a few things missing so I've asked DD2 to take me on Friday, I'll stock up on a few items that Tesco don't stock whilst I'm there.

Lyssa, Beano says thank you for the scritches.

JanF, fortunately we get very few.

This morning I decided to clean the bath room, I'm usually very careful about which cleaning products I buy but limescale is a huge problem here so I bought some strong descaler as it's a problem on the boat.

This is the third time I've tried to use it, it's the sort you spray on and leave. On the previous occasions I've used it Steve has noticed, rushed in and insisted on scrubbing it off and then  claims it's useless. This time he was distracted so I was able to leave it for the required 5 mins, spray again and leave it again and when I sprayed it off the scale had gone. This scale problem is made worse by the type of tap we have, it's very fiddly to clean and I can't get a scrubby between the mirror and the tap. 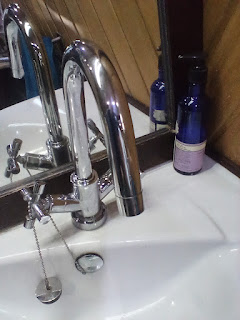 Rambler, he drives me round the bend too.

Jaccs, Steve doesn't get up any speed carving the joint, it's done very slowly.

Margaret I have a few rude teeshirts but the font on them is so ornate on them very few people realise what they say.

I read a comment on FB from someone celebrating her 20th wedding anniversary, she said " I have loved my husband for more than 20 years and there isn't a single day  of those 20 years that I haven't wanted to brain him and bury him under the patio.

I understand what she means. Every morning when Steve finally gets up, he walks into the living room and my heart lifts at the sight of him. I smile and say good morning,  he walks to the  clothes airer and starts to rearrange the washing I've just hung up. I immediately want to push him overboard!

I'm sure some people have perfect relationships with never a cross word. I don't!

it was a very frosty morning today, I put the heating on for an hour first thing then after walking Beano we took the boat across to a pump out, we emptied the rubbish and recycling and purchased 2 bags of coal, they will last us a week probably.

I paid our boat licence after lunch, it should be paid by automatic renewal but I've made alterations to it so I had to cancel it a and start again. Not long after the payment had gone through I received a phone call. It was a recorded message saying " This is the internet fraud department from your bank, your recent payment of £600 to Western Union has been stopped. Press 1 to speak to an advisor about this"

Needless to say I didn't press anything, I hung up.

I was told this morning that one of the nearby boaters died recently, he'd been unwell for the five years we've known him. I'm not sure what was wrong with him but I do know that the medication he was on was making him almost as unwell as his illness.

We aren't really sure what he is, a few people have suggested a Parsons JR but his legs are really short, he has twisted feet that look like Queen Ann Legs. I've also been told he's a good specimen of an old style JR. What ever he is he's well loved and very spoilt.

Today I've walked 8.87k over two walks with Beano so I need to do more, Steve only walked some of that as he didn't get up until 11 so only came on the 2nd walk. He complains he doesn't sleep well, I'm sure more fresh air and exercise would benefit him.

I've ordered some tee shirts, one says My crystal ball is telling me you are full of sh1t.

Roast beef with all the trimmings to eat today, Beano will get his share. He gets boiled potatoes, carrots and beef.  Steve wanted to carve the beef, this is fine but he always wants the entire kitchen emptied before he starts. He's like Sky Stallone getting ready for the battle in Rambo, removing his jumper and swathing himself in umpteen teatowels before he wields the carving knife. 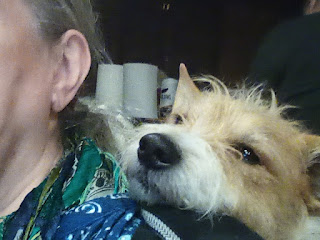 Beano likes to sit on the back of the sofa with his head on my shoulder.
DD2 collected me and took me back to hers for a cuppa this afternoon. I took over another bag of craft stuff, my granddaughters were delighted with it all.
I've been struggling to walk after I fell out of bed but I think my toe is finally on the mend, I managed a three miles walk with Beano today.
I was accosted on the walk by a lady with a dog, I didn't recognise her but she was obviously pleased to see me.  She thanked me for telling her how to cook on a wood burning stove, she said I'd saved her a fortune in gas. I did work out who she was eventually!
I posted a parcel on Tuesday afternoon and on Wednesday morning I received confirmation that it had arrived, very speedy service.
at January 14, 2022 6 comments:

Chris as Jacquie says barley makes nice risotto, I tend to chuck it in with rice or any soup or casserole in making.

Jaccs I'm sure Beano definitely would not approve of wellies!

Wendy I do do try but Beano is not keen on having his photo taken and tends to turn his back on me.

I fell out of bed at about 1a.m. to be more accurate I was shoved out of bed. I'm mentioning no names but looking pointedly in Beano's direction! Somehow I managed to strain my big toe, I got back into bed but couldn't get to sleep as my toe was too painful. I took paracetamol and watched tv until the pain subsided and I dropped off. I needed to watch something boring and undemanding so settled on Couples Therapy. I don't know how effective the therapy was but the poor bloody therapist seemed to have aged 10 years in three months.

I awoke for the second time about 9 ish, my toe was sore but bearable so I dressed and walked Beano. When I got home I cooked a meal for Steve and then went to the post office.

I find any outing quite difficult now, lack of practice I assume, I'm happy enough to walk the 20 minutes to the bus stop and to catch the bus and when I got off I made straight for the post office. It was when I came out I had problems, I was struggling with my balance so I stood against a wall until I was steady. I don't feel scared, just wobbly and bloody cross because I'm wobbly. I'm sure people think I'm drunk when I stagger around.

DD1 messaged me to tell me that another of her children has tested positive for covid. The school and social services are giving her contradictory instructions on what she should do.

DD2 messaged me to tell me that she had finally received her deposit back from the house she rented whilst her new build was being completed. It's taken forever as the landlady argued about everything and wanted to keep the entire deposit.

Debby I won't have candles on the boat, I'm such a clutz I'd  knock them over.

Marty I will buy a hot water bottle, I've just not got round to it yet.

I'm still continuing my decluttering, I emptied one of the huge underbed drawers yesterday and another bag of fabric left the boat.

Steve set his alarm to get up at 9:30 only to get a phone call to say that the delivery was delayed and wouldn't arrive until just after 12. It didn't matter, it's not like we had anything else to do but Steve would have stayed in bed if he'd known.

I took half a cucumber and two tomatoes round to my neighbour, she gave me a packet of biscuits she was given, I'll pass them on to one of my daughters. This afternoon my neighbour and I walked to the nearest lock. I think Beano would rather have stayed home as it was raining!

The tap is not really clean there is still a lot of scale on it. I can't get a toothbrush or bottle brush in the gap. Unfortunately the ...