Thank you for your comments about the foul mouthed person, fortunately there were other people around who were obviously on my side, so I wasn't as upset as I could have been.

I went to the butchers/greengrocers and the supermarket today, I spent about £20.
I bought:-
Lamb shanks for lunch tomorrow
Pork belly, liver and sausages for next week.  We'll have liver and onions, sausage and mash and slow roasted pork belly.
I also bought mushrooms, onion and a huge leek.
I shall make a big pot of leek and potato soup for lunch next week.
I also bought a loaf of bread, baked beans and a large mans shirt.
I'm making a nightshirt and nightcap for a forthcoming play at work.
at January 31, 2015 1 comment:

Yesterday we had a very brief flurry of sleet/snow, it arrived just as I left work, it took me 30 minutes to travel a mile.
When I got to a junction I couldn't turn in as there was already queue of traffic trying to negotiate the steep hill.
A queue of traffic soon built up behind me and after a few minutes someone started to honk their horn, after a few more minutes someone came over to yell at me.
It seems my attempt to reach home was making her late for an appointment, she repeatedly requested that I 'move my fucking car'.
By now the traffic was at a standstill on the opposite side of the road blocking the entrance to the turning I needed.
Then a bus up ahead skidded and blocked the road ahead of me, all this time the same person continued to scream invectives at me.
Eventually, when there was a pause in the tirade so I asked her exactly where she expected me to go as the road was now blocked in all directions.
I explained that I was trying to reach my home, it seem I had chosen a 'fucking stupid' place to live.
If I had realised ten years ago that I was going to cause her all these problem, I would, of course, chosen to live elsewhere!

The heating at home is set to frost setting to ensure no damage occurs if we get a sudden cold snap. If it's very cold we'll turn the thermostat up a bit, but  if hubby is comfortable in a short sleeved tea shirt, then I put an extra cardigan on & make a hot drink before turning the heating up & when I'm sitting down I have one of my home made quilts or crochet blankets over my knees, but I refuse to walk round looking like the Michelin man just to keep warm. Part of my problem is not being able to wear tights or trousers; it makes it harder to stay warm wearing just dresses.
We are going to a wedding reception in February, I've been looking in the local charity shops for something to wear, but nothing so far. If I don't find anything I'll team up one of my work dresses with a jacket to smarten it up. I've had another clear out of my wardrobe, I had a few dresses that I wasn't comfortable wearing with hold-ups, so they have gone in the bin, so now I've just 3 winter dresses, 3 jackets & 4 cardigans in my wardrobe. I certainly cuts down on the 'deciding what to wear' time.
I'm spending an hour or so every evening decluttering & sorting, I have one item to ebay & I'll list some specialist books on Amazon, but the rest I will donate to  the local charity shop.

Tighter than a pair of budgie smugglers

I don’t often write about the fact that our lifestyle could be seen a quite frugal. We don’t go out on a regular basis, rarely drink, neither of us smoke & unlike some of our colleagues we don’t shop as a hobby. Yes we buy things but only when we can afford them & never on a whim.
This is just our life & we are happy & comfortable, we aren't on the breadline by any stretch of the imagination but it does mean our life could be seen as boring.
We are no longer as skint as we used to be, but old habits die hard. Last weekend for instance I defrosted a chunk of turkey left over from Christmas. We had roast turkey for Sunday lunch & the rest was used in turkey sandwiches & turkey supreme. I served the turkey supreme on Saturday with vegetable rice using up half an onion a couple of bruised mushrooms and a handful of frozen peas. Last night I used up the last of the potato from Sunday, added some spinach & made bubble & squeak which I ate with a poached egg.
Our diet tends to be fairly monotonous, not through lack of money but because hubby is a fussy eater & a creature of habit, this actually makes things easier as I don’t have to make many decisions on what to eat as it tends to be the same 10 meals in a repeating cycle. And at least everything is cooked from scratch.
Hubby & I have helped a young couple we know start to cook proper meals for themselves & their toddler, they no longer feed the child on sausage with bought in mashed potato every day. They now make sausage casserole, spaghetti Bolognese & chicken casserole every week and they are gradually adding to their repertoire of recipes.
I delayed my pension for a year & then requested a lump sum, this is still in the bank & has been added to, we were intending to pay it directly off the mortgage, but Santander are proving very difficult & with a possible move on the cards we’ll keep the money tucked away for now.
It’s payday on Thursday, hubby & I both pay an amount into the joint account to pay the bills, what we have left over is ours to spend on what we want/need.
As of next month my reduction in hours means, obviously a reduction in pay so my left over cash is going to be a very small amount but as all I buy is a little yarn occasionally I’m hoping this won’t be a problem.
If I told hubby I was short I could of course reduce my contribution, but I tend to be a bit obsessive about paying my way, so I won’t say anything unless I’m really struggling.
at January 27, 2015 5 comments:

What Nanna & Norah made today.

Finally, finally, I have agreement to reduce my hours, from February I am finishing at 2pm every day. It's only a reduction of 7 hours a week, but I hope it will help and I hope I can manage on the reduced money.

Thank you Margie & RQ, I'm not specifically unwell, just a bit meh. Helen, I did nothing but granny squares for years and have only ventured onto other patterns thanks to Attic24 and then youtube.

This morning the kitchen table is covered in drinking straws, glue sticks, paper scraps and glitter. This can mean only one thing, one of the DGD is visiting, so, much crafting is happening. I'm dropping my L&M at work at 8 when I do I going to sneak into the staff room and 'borrow' a book. We have a selection of books left by the Book People, I've ordered a copy of one of the books on bag making, but it won't be delivered until Wednesday week. DGD can't wait that long, so I will borrow the staff room copy this morning and return it when I collect my L&M this afternoon.

After I drop my L&M at work I'm collecting DD and giving her a lift to work  and then DGD and I will shop at the bakers and butcher, then home to make a bag. I will teach her to use my sewing machine as I did her brother last week.

I need to speak to my other DD as well to arrange for the other DGC to visit soon, they too are itching to learn to sew.

Sorry my blogging is a bit sparse at present, I'm not feeling too well, everything seems to take a lot of effort.
at January 21, 2015 3 comments:

We had a good time this weekend, a visit from DGS, I taught him to use my sewing machine, he made two Pokemon figures, a Diglet (I think it looks like a penis, but that's boys for you!) & something that looked like a star. Next time he wants to make a messenger bag, I have a book of projects so I'll have a look at what we'll need.

Hubby has asked for a crochet blanket of his own, I'm going to use up all my aran weight yarn on it I think, I have quite a bit and most of it is in dark colours.

Hubby has put his plastic greenhouses up in the spare room & has started off some seeds, we had soil warming upstairs for a few days before he did the planting.
at January 18, 2015 2 comments:

Number One. We've had our house valued at £250k, much more than we expected.

Number Two. We've had an invitation to a wedding reception! It's an evening event so we've booked a room in the hotel where the reception is being held. They have a deal on for the wedding guests so it's £60 for the room & breakfast, a little treat to look forward to.
at January 12, 2015 1 comment:

My slippers were gritty so I emptied them out & they were full of cake sprinkles, the result of baking with DGD who is nearly 4.

She is now asleep in the spare room surrounded by a pile o 'Sharpe' books. 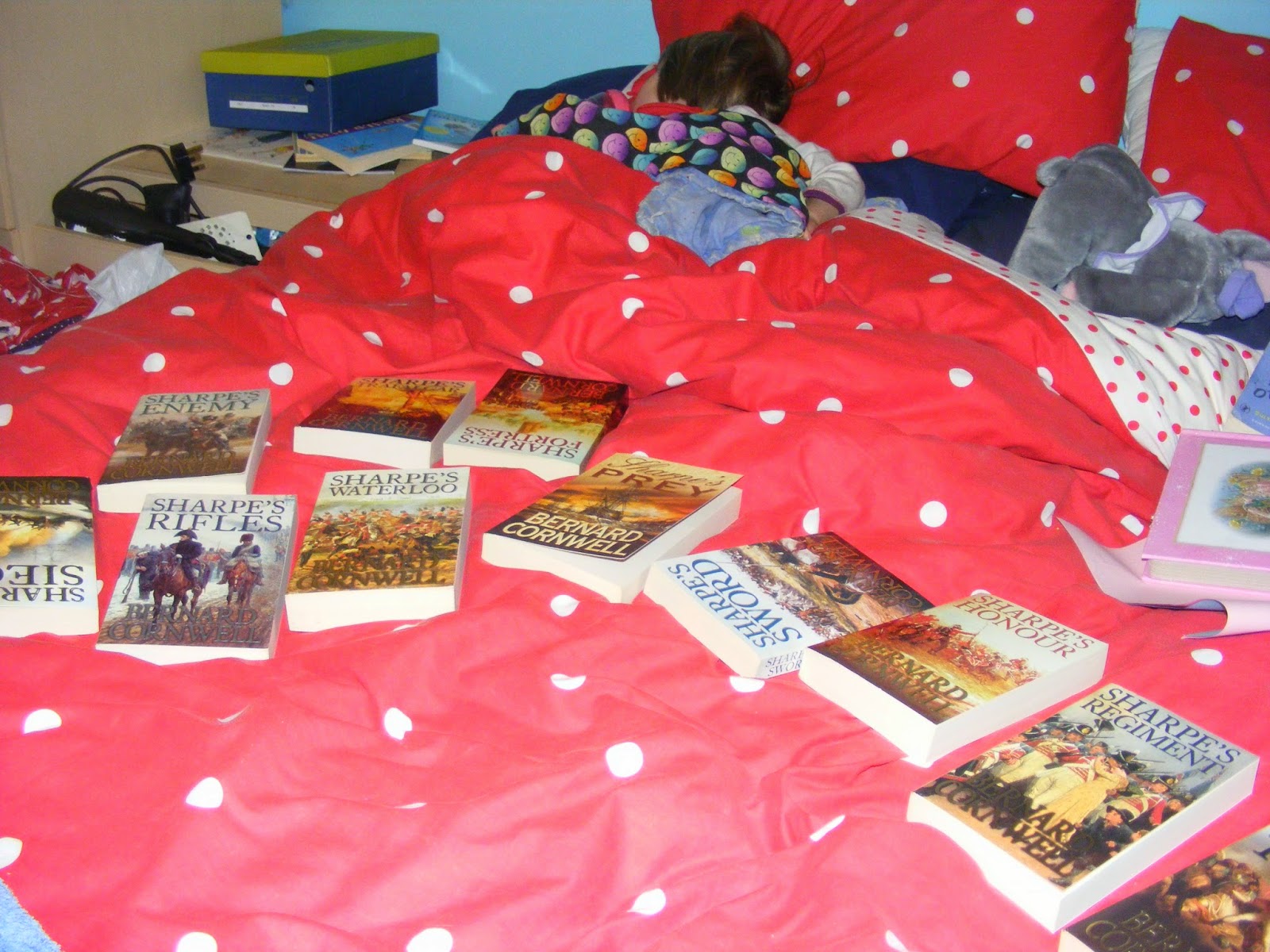 Some ups, some downs

Let's start with the downs, just one big one really Sensodyne toothpaste have changed their range and their packaging. My beloved is as fussy about his toothpaste as he is about his food and I purchased the wrong toothpaste, ye gods what trauma, much wailing and gnashing of teeth ensued!

The ups? Firstly I have almost finished another rainbow blanket.
Secondly I have been asked to knit a couple of arm knitted cowls for money, woohoo.
Thirdly, I've mastered the art of going to the toilet whilst arm knitting, it was suggested to my by a work colleague when I explained my dilemma. I now take my knickers off before I start knitting. 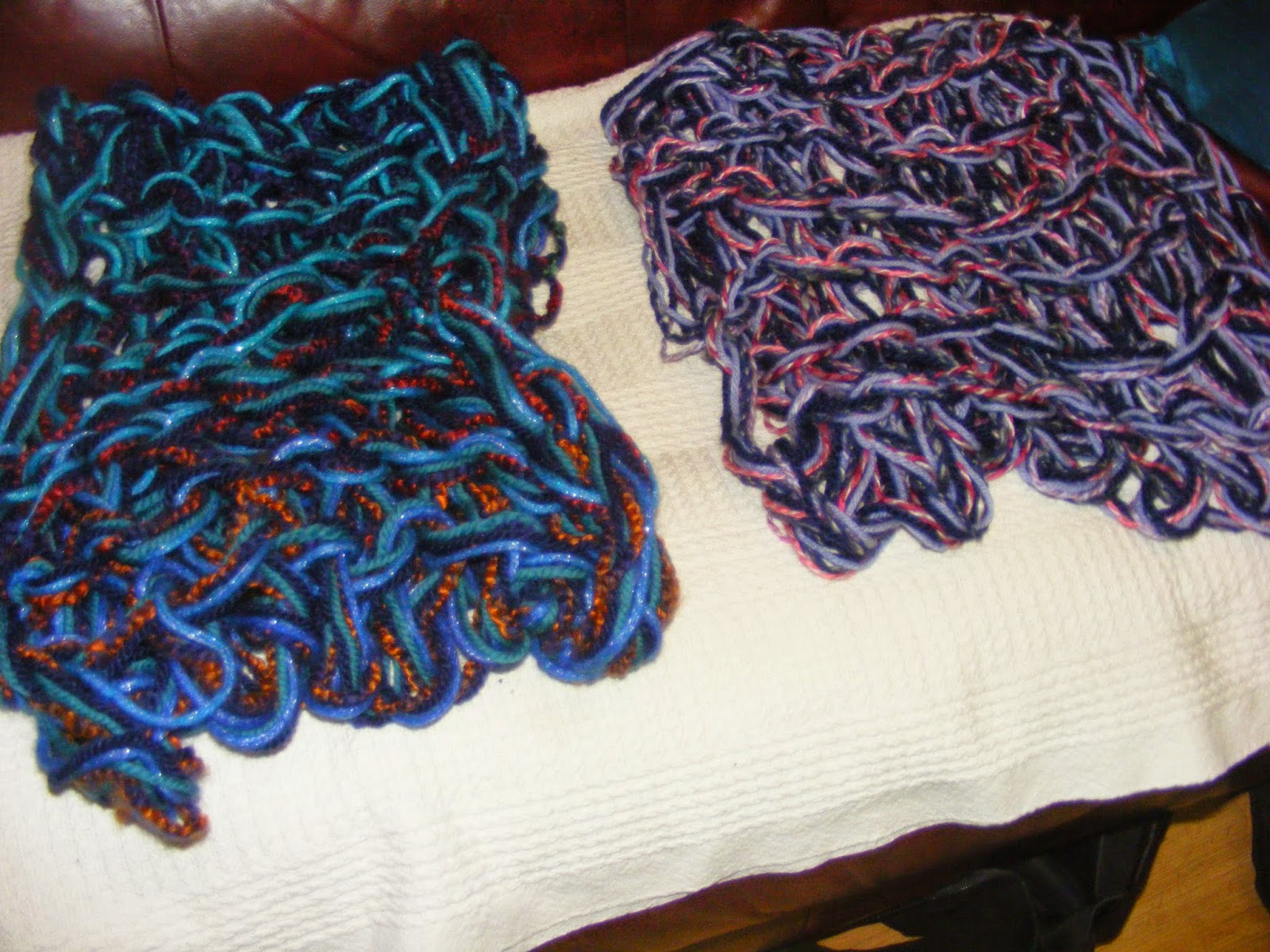 Not so much ta-dah, more Oh bugger 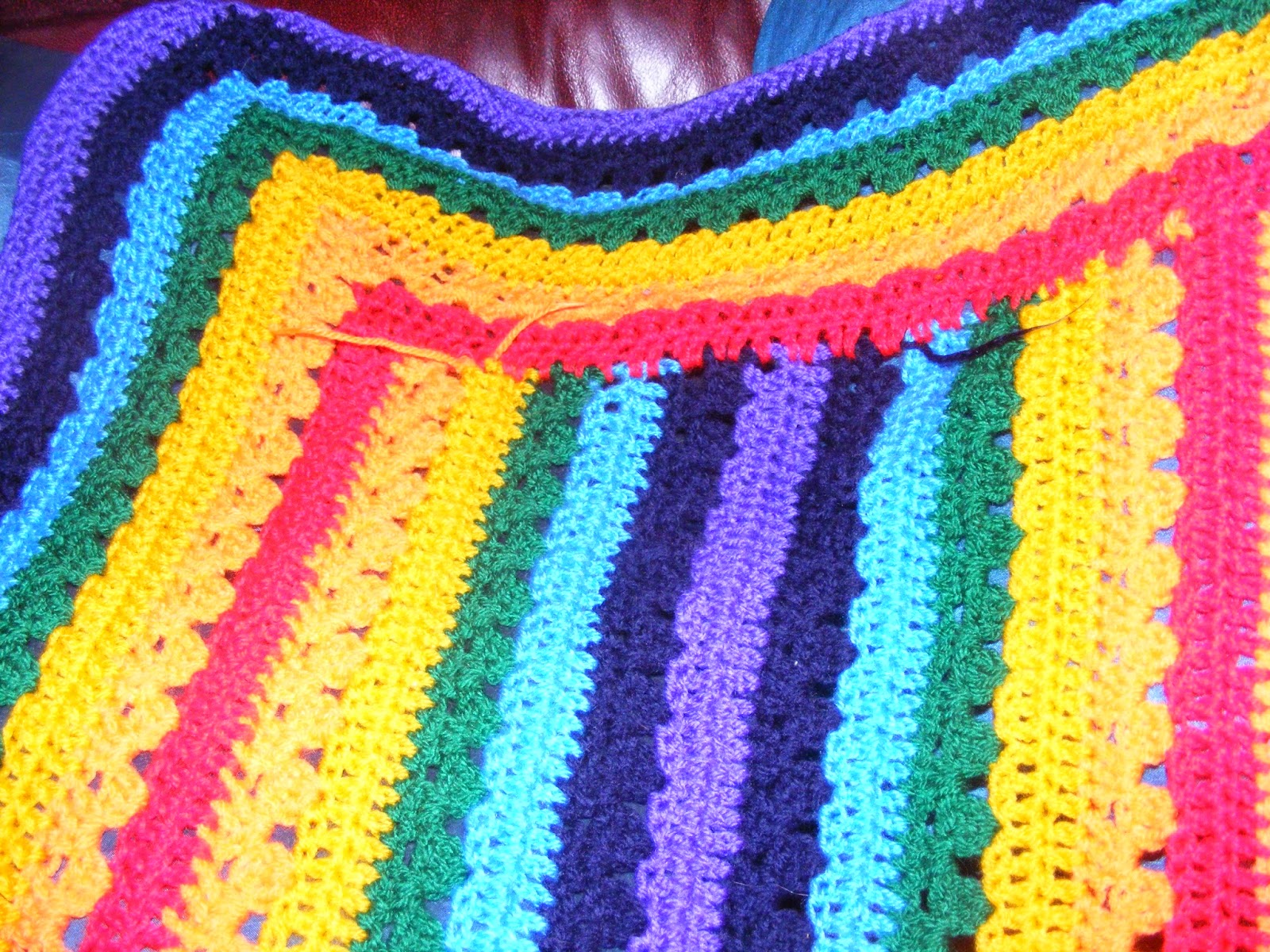 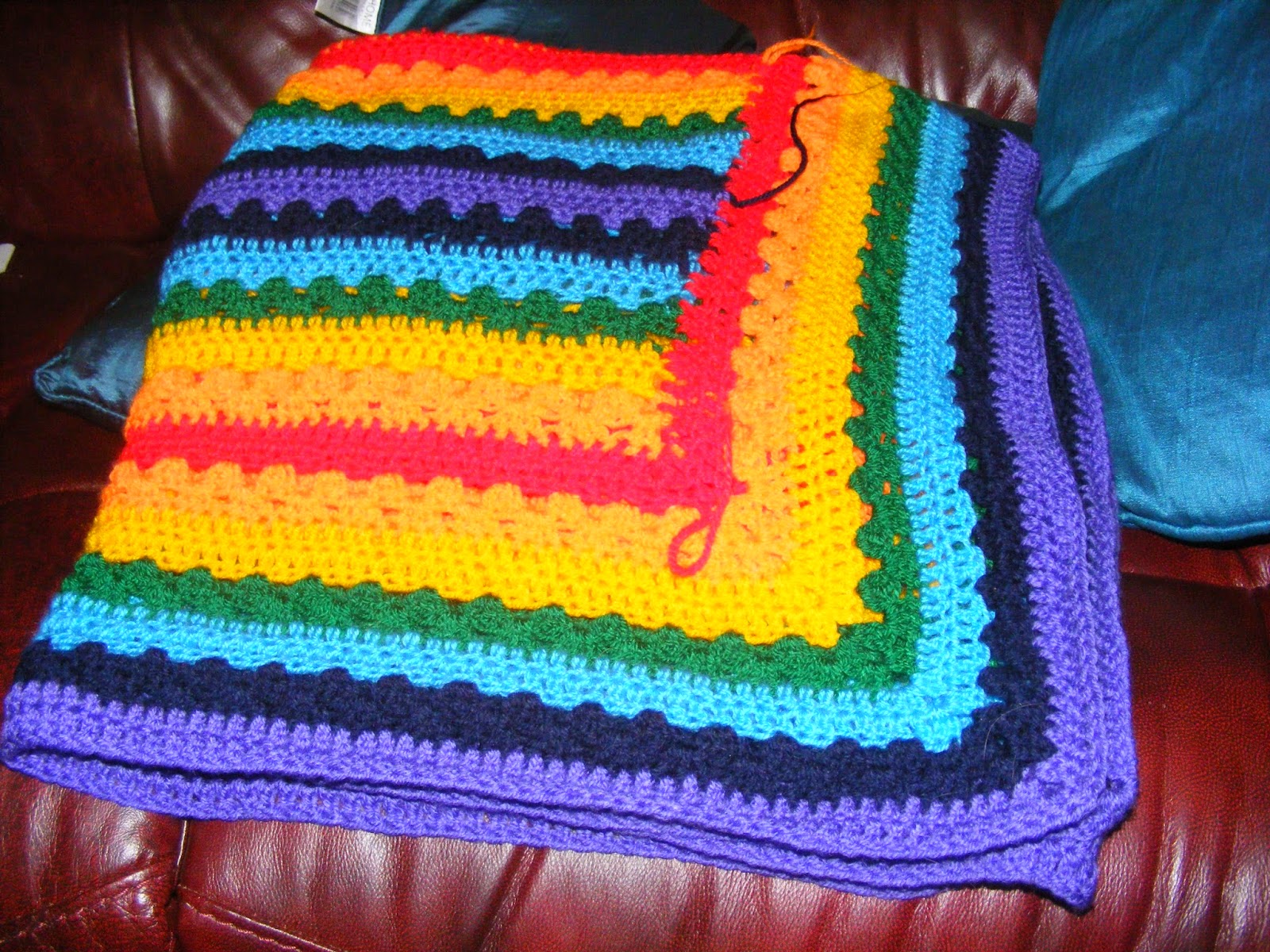