I have my letter from the hospital, the date for having a needle stuck in my eye, oh joy.
If this doesn't prove successful then more surgery will follow, even if it is successful I have been warned that the injection may cause a cataract to form, even more joy.
Still, I have a couple of snowdrops in flower in the garden, I have one of my DGS staying tonight & I'm ignoring the alcohol ban and treating myself to a bottle of ginger beer!

Yesterday DD Lizzie & I took DGS 10 and DGD 7 to see a show, DGD suddenly said 'How is that man playing the piano with only air in his hands?'
Lizzie explained that the man was conducting, the piano was being played behind a curtain, lol.

I'm desperate to get some sewing but, but too tired to do any tonight, tomorrow I'm dog sitting, a mistake I'm sure as the dog fret without his owner & wakes me 3 or 4 times a night for reassurance.

I have been directed to an online fabric shop by a friend, the Textile Center on Ebay, they seem to do a lot of jersey fabric, ideal for the sort of dresses I want to make. I may treat myself once I made some baby/children's clothes.

This 'taking it easy' isn't all it's cracked up to be.

I left work at 2, came home and cleaned the fridge.
Went back to work at 3 to collect hubby.
Came home, emptied and reloaded the dishwasher.
Went to collect DGD at 4 and took her to gym club.
Came home at 5 after gym club and made pasta carbonara with some left over ham, made sardine fishcakes with some leftover mash, cooked 2 lonely sausages to make sarnies for hubby's packup tomorrow, sliced the last of the beef from yesterday, I'll make that into something later on in the week.
at February 23, 2015 4 comments: 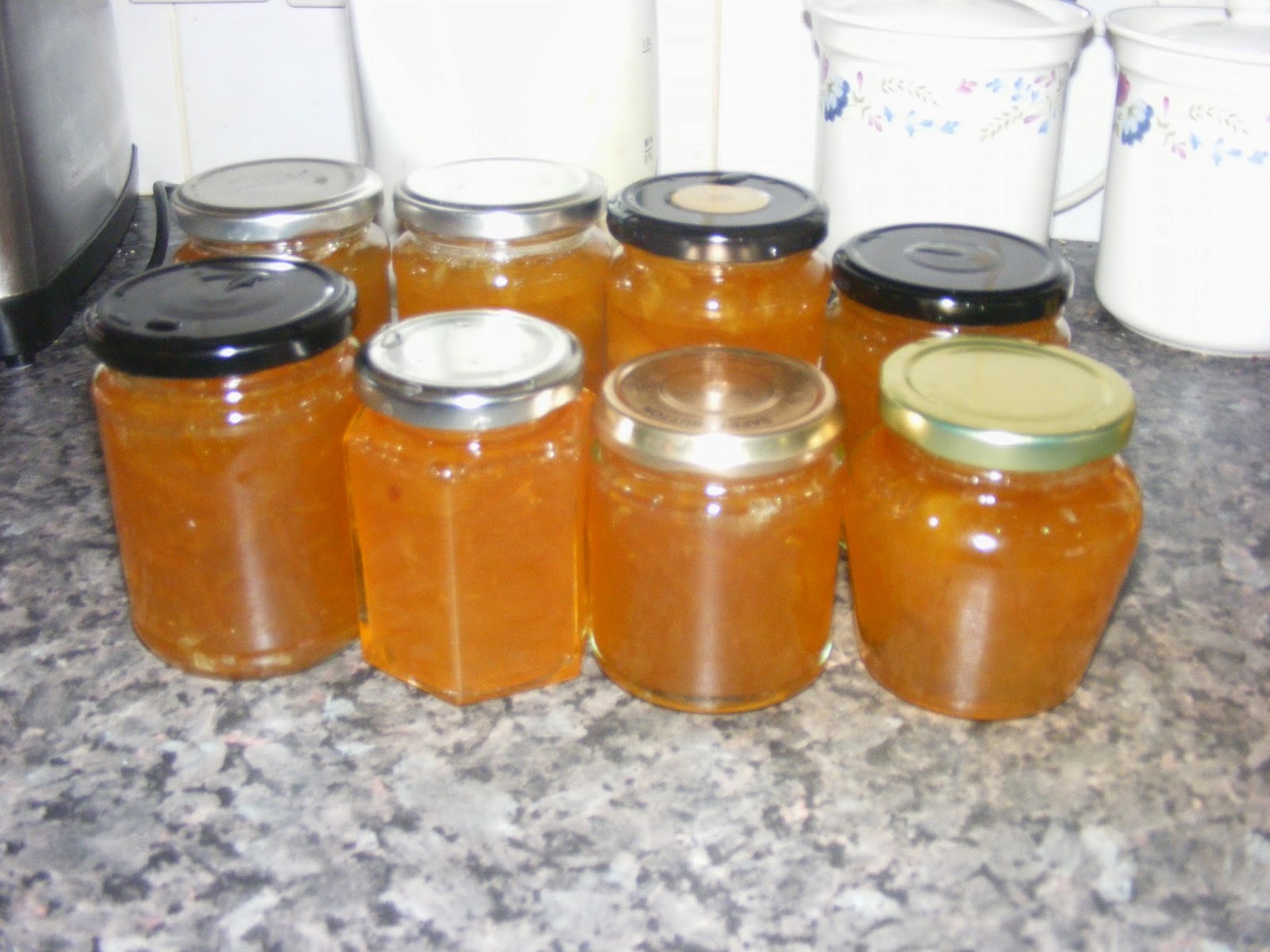 It's been a busy weekend as we've had one of the DGD's visiting, I've made 8 jars of marmalade as it's the time of year when the Seville oranges are in the shops. They were too hot to label when I took the pic.

DGD & I made up a few kits I'd saved from some magazines I was given, a stuffed owl and some cards with  felt flowers on them.

We treated her to fish & chips for lunch yesterday and at tea time she asked for ham & pineapple pizza, I only had cheese & tomato pizza in but I had some sandwich ham & a tin of pineapple so I added the extra toppings needed.

This morning at 7:30 we made pain chocolate for breakfast, she ate a couple and saved the rest to share with her siblings. When my L&M got up about 9 and had scrambled egg on toast she had the same, I'm not sure where she puts it all as she's so skinny.

We had roast beef for lunch and as she isn't keen on potatoes I made extra little yorkies and she ate 4 of them.

She also helped plant and label some seeds, cucumber, sweet peppers & chili peppers, we then sorted out some fabric to make some clothes for the twins and some items for the handicraft stall.
at February 22, 2015 2 comments:

I've just been asked if I can make some stuff for DGC's summer fete in May.
It needs to be things I can sew as there are already two knitters and a crocheter making things for the stall.
So far I've thought of lavender bags, hop pillows and pin cushions, I'll post pics of things as I make them.
at February 16, 2015 11 comments:

My level of panic attacks has been going into overdrive for the last few days.
So it probably wasn't a good idea to watch Richard Hammond using a Land  Rover Defender to winch himself up a bloody great dam, I now feel panicky & sick!

I've also mislaid my glasses, so I'm wearing an older pair (with the same prescription) They were fashionable when I bought them, about 20 to 30 years ago. My daughters claim I am channeling my inner Deirdre. 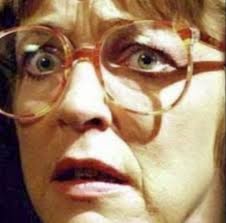 We went to a wedding reception yesterday, just as we were about to leave my L&M decided his shirt needed ironing, so I offered to do it.
It wasn't until I started to iron that I realised that the last items I'd ironed had been the glittery capes attached to the Frozen dresses I'd made for the DGD.
So the shirt, once ironed, was smooth but glittery, it was now too late to do anything about the sparkles.
I reassured hubby that no wedding was complete without a bit of glitter.
at February 15, 2015 2 comments:

It's noisy here tonight, we have 4 year old DGD Eileen staying over but she's fast asleep in bed and has been since 6:50.
Tonight it's the boy racers making the noise, there seem to be a few of them roaring around, there is one really snazzy car that not only has a deafening  exhaust but also has brakes that sound like a release of compressed air.
As long as they don't decide to meet here every evening I don't really care.

I'm making the most of my shorter working days, I've made a couple of costumes for a play that is being performed at work. I'm doing a mid week wash instead of leaving it all until the weekend & I'm cleaning out the fridge mid week.
I'm trying to finish a baby blanket  as I have to start another one straight after for another pregnant colleague. I've also repaired some of my DGD's clothes & done some paid for sewing

I'm still struggling to eat according to the contradictory advice from the Dr's, but I have found something absolutely yummy, HM fresh salsa, it's just finely chopped tomatoes, red onion, a splash of lemon juice, a sprinkle of herbs and a shake of pepper. Tonight I made some and ate it with some tinned tuna.
at February 13, 2015 3 comments:

I'm having a lazy day today as I'm tired, the stag do ended at 2am!

Our overnight guest woke around 4:30 & decided to rearrange the furniture, he seemed unable to find the en-suite shower room and was having difficulty finding his way out of his room so for some reason he decided to remove all the drawers from the bedside chests.

By 5:15 I could no longer bear the miasma of alcohol fuelled flatulence upstairs, so I got up, came downstairs where the air was sweeter & read my kindle.

By 9:30 my beloved & our guest were both up & awake so I made them a cooked breakfast and around 10:30 dropped our guest home to his wife to be, he had a headache when he got up so I gave him some painkillers, he'll have earache when he gets home as he phoned his beloved at 1 am to say he's changed his mind about which song to use for their first dance as man & wife & proceeded to sing his new choice down the phone to her!
at February 08, 2015 No comments:

I have bought a new sewing machine, it does lots of stitches including the alphabet, it will quilt & it came with 5 pairs of scissors, 20 reels of thread, needles and lots of feet. I got a really good deal for the the price and I'm really pleased with it, I've had a play with it but not done anything much with it so far. Hopefully I'll have more time next week.

We had DGD Norah who is 7, to stay Friday night, we played some games & then she went to bed. This morning we made an Olaf toy, played with my new sewing machine & made a batch of cakes. When I took her home around 1ish DGD Eileen who is 4 said to me 'Next time you are picking up?' I replied 'You, I'm picking you up next weekend', she clapped her hands with glee. It was her turn this weekend but on Friday her mum phoned me to say 'Eileen won't be able to come over this evening, she's just redecorated the bedroom with her stomach contents', Poor little scrap was really unwell but seems better now.

At 3 o'clock DD phoned to say that she'd been offered work this evening but that she'd got tickets for the local pantomime. Her husband could take the children to see the show, but he couldn't take Suzie as she is only a few months old. So I offered to have her for a few hours so DD didn't have to miss work & the children didn't have to miss the show. Suzie was full of smiles and squeals for about half an hour and then she fell asleep and stayed asleep until she went home.

Hubby has some friends over tonight, a stag night for one of his colleagues. I'm staying upstairs with my laptop and Kindle. Earlier I cooked some marinated chicken wings, made pigs in blanket, some garlic bread. I bought a selection cheese, some crackers, crisps and I made some salsa, cheap and simple but very tasty. I chopped up a small onion and a pack of tomatoes very finely, I added some lemon juice, dried chili and a sprinkle of dried basil.

My talents are many and varied but unfortunately do not include the ability to park a car.
I just get out and abandon my when I reach my destination.
I am slightly better with my little Nissan than I was with my tank of a Honda, but not much.
Imagine my beloveds hysterical laughter when I arrived at work after it had snowed to find that the lines marking the spaces were not visible (I was the first person to arrive).
I took a blind guess parked up & went to my office, well bugger me, when the snow melted, not only was my car equidistant from the lines, the car was perfectly straight!

You phoned to ask me what?

Yesterday evening I received a phone call from my bank, they had noticed that there was more money in the account than usual & wondered if I'd like a loan!
Say what?
Where is the logic in that?
You have more money than usual would you like to borrow some more?

Doing weird things in the bedroom (with pics) 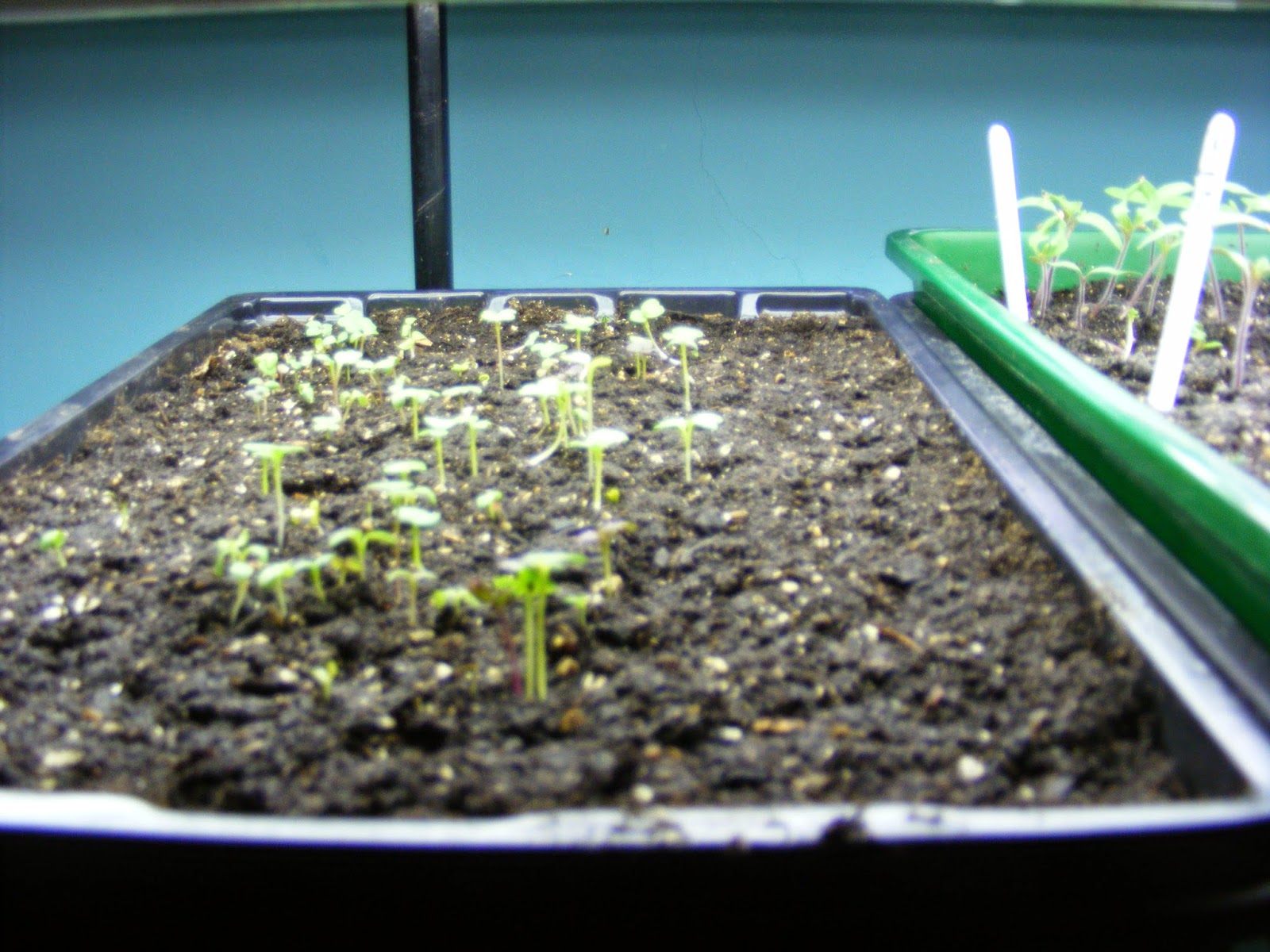 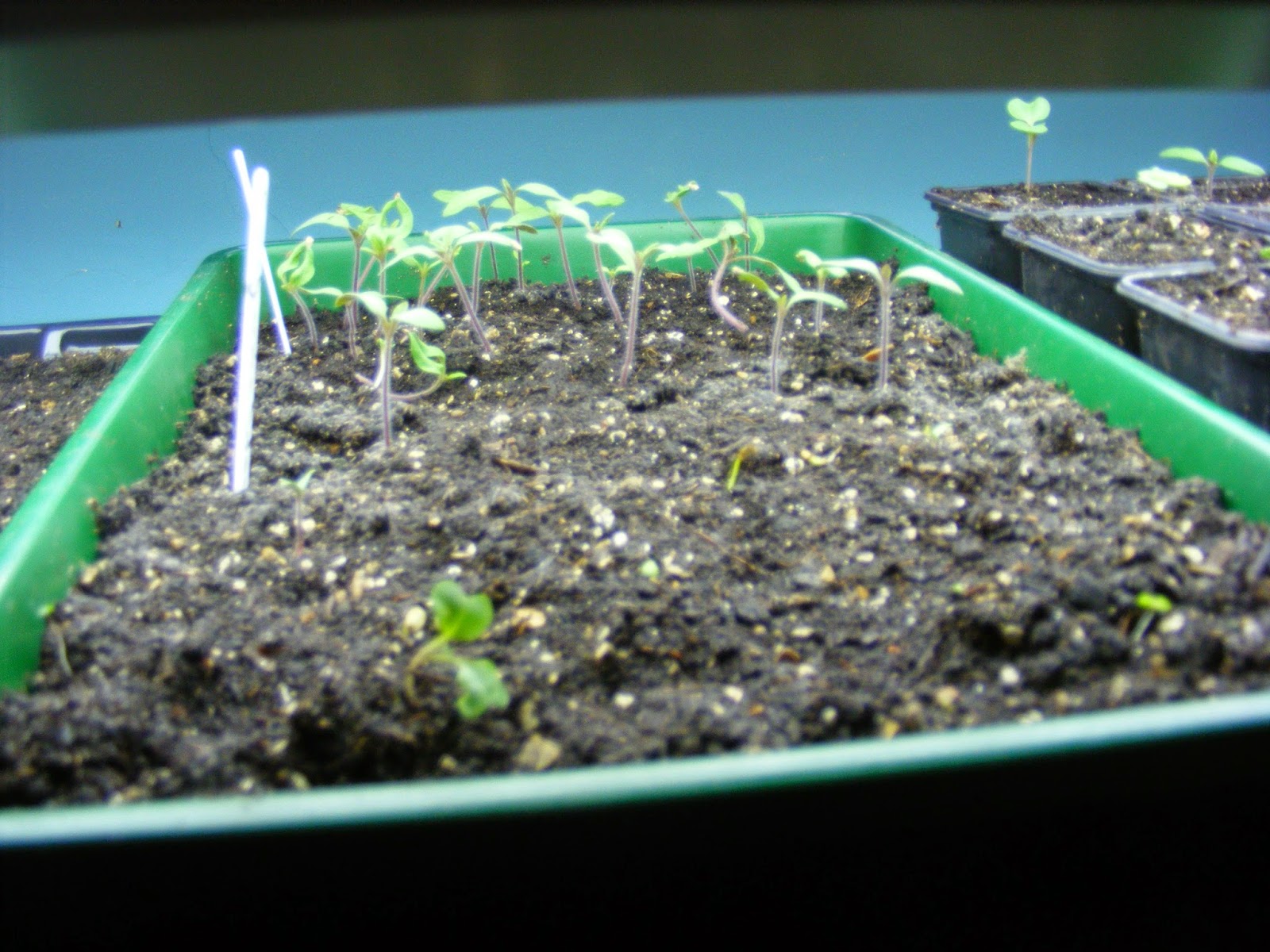 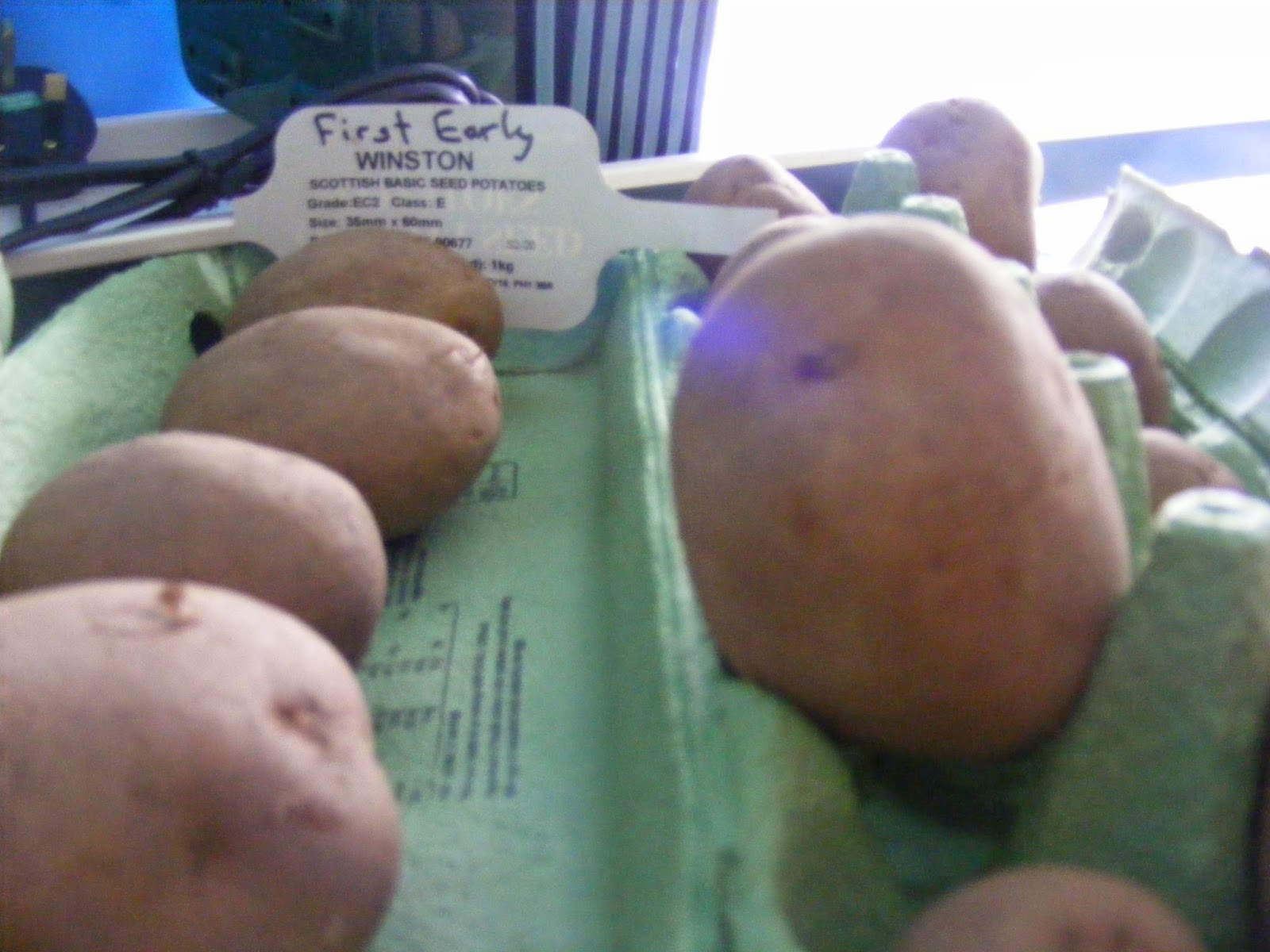 Piggy in the middle

One day when I was in the summer house a neighbour made some strange comments about me watching tv too loud and glared at me. I was confused...