It's curtains for me! 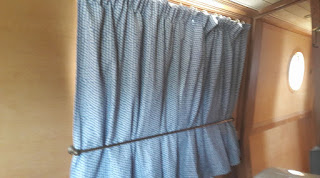 A very blurry photo of the first set of finished curtains, they are sagging at the top as there aren't enough hoops on it to hang the hooks on.
We are changing all the metal rails for standard curtain rails at some point as the current metal ones are a mix of brass and chrome and they are also a mismatch of sizes, it looks as though someone got a job lot cheap and just put them up randomly.
I don't have a preference as long as everything matches, the existing curtains were annoying me as they were six sets on he boat and every set was different. Maybe it was a fashion thing but it didn't appeal to me.

Like me you prefer uniformity rather than random. The curtains look great.

Those curtains look great to me!
About money making ... could you not take passengers for little trips? Do you need an 'Elf and Safety cert for something like that? Or lessons in how to manage a lock? What about talks to local organizations on "how we gave up bricks and mortar to live on water ..." but making sure that they paid you for such talks.
Margaret P

With regard to what galant says - I think you would need a rather hefty insurance policy
to carry passengers, apart from anything else. Curtains look great.

In a small space such as your boat I think uniformity would definitely be the order of the day!

Yes, I agree with The Weaver of Grass, I was perhaps wrong to suggest trips around the locks (lochs, ha ha!) Sitting for art classes seems a good idea. You get a rest and get paid for it (although holding an awkward pose for an hour or two mightn't be comfy.)
Margaret P

ohh they look fab. Could you please tell me what you have at the bottom to hold the curtains back? This would work very well with velux sky lights I think. I need to add some form of net to a sky light, to stop bits and bugs coming in to the window, but would like them to be floaty to add a little feminine touch. Thank you in advance!

there is a bass pole under each window Sol, that's what keeps the curtains back.