Beano's had a bad day.

Weaver, we were in Hungerford, it's very pretty but we're moving on now. We've filled the freezer with meat from the local butcher, the cupboards are full, the water tank is full and the poo tank is empty.

Janf, we have to keep moving, we have to abide by the 'constant cruiser' rules. Tow path moorings are two weeks, this mooring on Hungerford Wharf a is two days, some places are one day, some are seven day.

Ellen as our boat is 10ft wide there are parts of the canal where the locks are too narrow for us to travel through.

Beano has had a couple of bad days. In Thursday he had a shower, as soon as I turned the water on he ran and tried to hide. When I tried to pick him up he scrambles away crying. Eventually he ran to the back of the boat and jumped on Steve's lap. There was no escape, I lifted him down and carried him to the shower. I have no idea why he hates being washed so much but he does hate getting wet.

By Friday he'd just about forgiven me for getting him wet when my son in law arrived to take Beano to the vets with me. Poor Beano had to have his jabs, he also had his claws clipped and his skin checked over. The vet believes Beano has an allergy as he doesn't have fleas or mites. He now has some tablets to take, apoquel a four week trial. I left the vets £116 lighter! Beano has forgiven me again.again

Here he is asleep beside me despite the thunder, lightening and heavy rain. 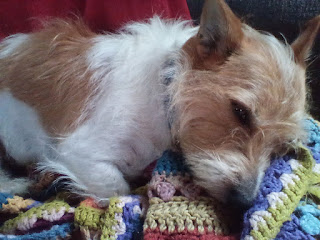 Poor little fellow - probably tired out from all his tribulations!

Poor little Beano, I sympathize as my Toby hates baths also. If only we could explain to them what is going on I´m sure they´d feel better about it.

Of course he will keep forgiving you - he has such a comfortable blanket to lie on and somebody to love him.

Aww!! Bless Beano, my Yorkie is the same, she can always sense when a bath is imminent and tries to hide!!

coal tar soap was a blessing for one of my dogs with skin issues.

We had no wifi at our last mooring spot so I couldn't post. It was a lovely spot and we were near people we know so Beano had a catch-up...