I was an only child and my parents were fairly strict, my mother was a teacher and was a tad overprotective. When we went on a day trip it was always to Brighton where the beach is all pebbles so no messy sand castles. I wasn't allowed to ride a two wheel bike in case I had an accident and I wasn't allowed to learn how to swim in case I went near water and drowned.
Because of this I tried to be a more relaxed parent, amongst other things my kids were allowed to slide downstairs on their duvets, they played 'islands' by putting the sofa cushions on the floor and jumping from one to the other. they had lots of pets, a climbing frame, they played mud pies and were allowed to get dirty and have fun.
One of my daughters messaged me today with this. She said she still finds it so funny that she and her siblings were allowed to do so many things but this was the one rule that was set in stone! 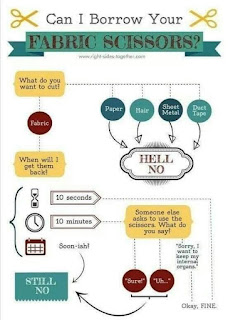 Love it! And I completely understand!

My Mom's attitude was if there were no flames or bones sticking out, it was all good - unless her good scissors were involved!

You taught them well! 👍😁

That's a good one! I need that poster.

oh yeah. Mom had this rule too. and if I had kids, I would as well!

I have this on a poster in my sewing room but the scissors are hidden anyway! Love your version of the poster.

My Mom had too many kids and too small a house. Her rule was go outside and play and dont come home until dinner. It was in Alaska and very undeveloped. We swam in the 50 degree lake, checked out all the trails and swamps, collected rocks and all kinds of natural things. It was all so dangerous but we all survived. Even the 9.2 earthquake in 1064.

I believe we became more self sufficient. Made mud pies, probably ate dirt, made snow forts, rode or ran all over town. It was wonderful. Ana USA

I agree with the kids upbringing , some of there friends were not allowed to come to our house, because they might get dirty, but we always had a garden full of friends. Hester. I also still hide my fabric scissors away from my grown up family !
Hope you are having a good weekend ,Hester.
Kathy xx

The kids knew better than to touch my scissor. Their father still needs reminding. learner. My DH reached for my good fabric scissors the other day to cut off a plastic tag and jumped when I let out a loud, NO! You'd think he'd know better after all these years--especially since they are left-handed ones...something I didn't know existed until I was 21. What a relief it was not to have that deep indent across my thumb from using right-handed scissors.

Ah the blunting of fabric scissors - I remember it well from my crafting days (before I developed the shakes)- cutting out of cardboard boxes to make doors and windows for houses for cats is a definite no no.