One of my favourite meals when it's really cold and dismal outside is bacon and potato hotpot. I originally got the recipe from The Pauper's Cookbook by Jocasta Innes. I no longer have the book but I can make the dish from memory.

I don't weigh or measure anything I just cook by eye, the finished dish looks awful but tastes delicious.

Today I used two and a half rashers of bacon, you can use gammon or even leftover ham from a joint.

Sprinkle some flour over the mix then add milk to make a thin white sauce. This needs long slow cooking so I put it on the multifuel stove where it sits all day.

I think the original recipe suggests cooking in the oven with the lid off for the last half hour but I don't bother. I serve this with baked beans for Steve and boiled cabbage for me. 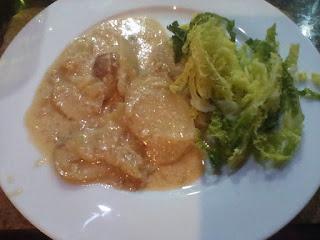 Steve thinks it would be improved by adding mushrooms but then Steve probably thinks ice cream would b improved by mushrooms!
at December 02, 2020

I'm all for simple meals like this. It's often the simple stuff that tastes the best.
Briony
x

Don't have a multifuel or hob etc... but I guess you could begin this on the stove in a heavy pan and finish up in the slow cooker on low. Agree with Steve... mushrooms improve anything maybe not ice cream!

That is making my mouth water.

Hi Hester, I’m a long time follower of your blog but have never commented before; but I saw what you had for tea - you certainly can’t beat that recipe. My only gripe is the length of time it takes to cook but it certainly is delicious.

One recipe that is similar is the pan haggerty lite that the hairy dieters makes - cooks in under half an hour.

That sounds lovely, I'd maybe put a bit of grated strong cheese in just before serving.
I'm with Steve on the mushrooms though, I'm an absolute addict. If I need 200g of 'shrooms', I buy 500g, because I munch well over half of them raw before they get as far as a pan!
Any kind of mushrooms, cooked with just a tiny bit of butter and lots of garlic, then plonked on top of thick wholemeal toast is one of my favourite lunches! X

That sounds a delightful meal! I have another cookbook of hers on old fashioned pantry keeping...one of my faves. I am all in favor of simple too, and I am finally able to embrace it, no longer working and having the social worries business sometimes brings. Now, where’s my bacon.....

Your potatoes and ham look so good especially with the cooked cabbage. I have a craving for cooked cabbage and have a head of cabbage in the fridge. I bet I will figure out a way to a meal similar to what you made by the weekend.

I have that book somewhere,and it’s one of my children’s favourite childhood meals

I am a fan of one skillet meals as well. I've never tried using bacon, but I use smoked sausage, onions, peppers, potatoes. I love to add sliced cabbage, but my husband does not like cabbage so I've taken to just leaving it out. Part of the charm of one skillet meals is the easy clean up. If I have to clean two skillets, it's rather defeating the purpose. I think we'll try this with bacon next time!